I believe that Connecticut’s marriage officiant law is discriminatory to minority faiths and I’ve started a project to change it.

What is the current law?

Section 46b-22 of the Connecticut General Statutes defines who is allowed to solemnize a marriage:

And though it’s only mentioned in annotations of the law, court precedent from the Connecticut Supreme Court of Errors (the predecessor to the Connecticut Supreme Court) on an older version of this statute further requires that ordained clergy be “settled in the work of the ministry.” In short, what this means is such clergy must be doing the work of clergy (i.e. preaching, providing spiritual guidance, etc.). 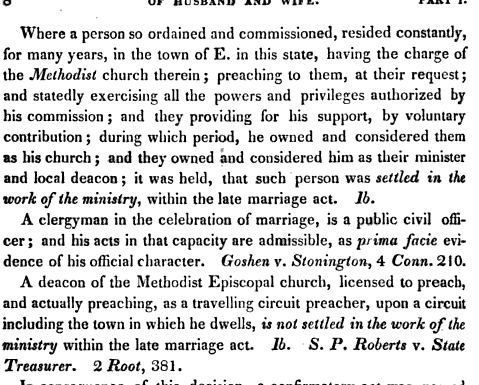 The official stance of the Connecticut government is made clear in this 2007 New York Times article:

But Connecticut is one of a half-dozen places that do not recognize marriages performed by someone who became a minister for the sole purpose of marrying people. Such a minister “doesn’t meet the requirements of the state statutes,” said William Gerrish, a spokesman for the Connecticut Department of Public Health.

Even in the one non-standard carve out the law does recognize (the Baha’i Faith don’t have ordained clergy), state law recognized as valid the authority of “democratically elected councils called Spiritual Assemblies,” the governing bodies of the Baha’i faith, to decide who can solemnize marriages.

Where does that leave Heathens (and more generally Pagans)?

When we start trying to apply the current law to new religious movements like contemporary paganism is where it starts falling apart. Heathens and Pagans do not have a governing body because paganism as a new religious movement is not a monolithic structure. It is a grassroots religion where small groups and individuals organize themselves.

There’s no church structure or pope from which religious authority exists to recognize members of the clergy. A coven my choose to have a priest or priestess to lead ritual. A kindred may be entirely “lay led” and rotate who runs the blots each time. Those leading ritual may or may not have training from any local or national organization. So when pagans are looking for someone to officiate a wedding, who do they choose?

In Connecticut a religious officiant must be someone who is ordained. The Universal Life Church will happily ordain anyone who requests it. However, it’s likely that the popularity of the ULC ordinations and “mail order ministers” is why that 2007 NYT article points out that getting ordained for the sole purpose of solemnizing marriages in Connecticut is not valid.

So how then, when contemporary paganism has no tenets or scripture requiring ordination before leading a religious group, are we to know that the State will view people ordained through groups like The Troth, A Druid Fellowship, and Circle Sanctuary as if they’re being ordained for the sole purpose of solemnizing marriages?

This uncertainty puts Heathens and pagans at a disadvantage under the law that those of traditional monotheistic faiths don’t have.

What should the law on marriage officiants be?

I’m of the opinion that two people who want to become married should be able to do so with or without a ceremony. If the law is changed so the two people wishing to marry sign an affidavit that they want to get married of their own free will and meet all the requirements to do so, then all marriages will be treated equally under the law. Whether you’re an atheist, Muslim, Catholic, Jewish, Heathen, etc. everyone follows the exact same process with the same requirements under the law.

If an independent secular or religious celebration of that marriage is desired it can also be performed, but it does not need to be tied to legal reality of getting married.